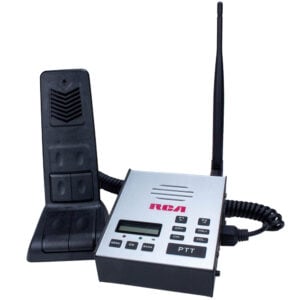 Radio base stations are essential components to a strong communications network. They’re easy to deploy, mountable to desks or walls, and offer a secure option that won’t be lost or “walk away.” They may be larger and heavier than handheld units that most people think of when it comes to law enforcement, the military, or construction workers, but they offer the same coverage as those handheld units — and, in some cases, cost half as much as traditional intercoms. If you might think their lack of portability detracts from their use, we’re happy to report that they more than make up for it in other key areas. Here are some of those benefits, and why we strongly encourage you to add the RDR2750 to your radio inventory.

They Run on AC Power

Handheld units rely on batteries to maintain a full day’s use out in the field. Even when charged correctly, they usually only last 18 months before it’s time to swap them out for new ones. Some people may push that limit to two years, but they’ll definitely start to see battery degradation in the form of lost signal strength, increased static, and shorter run times between charges.

Base stations, on the other hand, don’t need batteries at all! They run strictly on AC power, which means that all customers have to do is plug them in, and they’re ready to go.

They Don’t “Walk Away”

Two-way radios may run the risk of being misplaced or stolen, but base stations don’t have that problem. Since they’re able to be secured to desks or walls, no one’s going to waste their time trying to unscrew them, especially not radios that only use sockets for power. Plus, users can’t damage the power supplies for base stations like they can with handheld units when those units are left turned on while recharging.

Think base stations are prone to damage? Not true. Their rock-solid durability is on par with the technology that reinforces handheld units. So, even though they’re already safe from falling because they’re desk- or wall-bound, they’re also protected against anything you might happen to drop on them.

A single mounted base station is perfect for those industries with office or warehouse environments where multiple team members can share the same device. Plus, their compact size means they won’t take up space or clutter a workstation, and your customers will appreciate the fact that they don’t have to purchase and assign multiple handheld units.

Same Coverage, Half the Price

Any customer hesitancy to purchase a base station usually comes down to money. It’s true that many of them cost more than handheld two-way radios, often due to their size and equipment options. And that’s why it’s time to talk about RCA’s RDR2750 — the two-way radio that offers the same coverage as portable units, but costs half as much as traditional base stations. That’s huge!

Plus, it comes with all of the above-mentioned benefits and more: durable casing to prevent damage, basic push-to-talk functionality for user convenience, and advanced emergency features that make it ideal for coordinating teams in potentially dangerous environments.

Add These to Your Next Order

RCA Communications Systems is your one-stop shop for all of your radio inventory needs, from the RDR2750 (and other base stations) mentioned above, to handhelds and portables, hands-free audio accessories, and batteries. We’re proud to offer the best prices in the industry, the most reliable, responsive customer service and support, and the fastest turnaround times for new shipments. Check out our current inventory and give us a call to place your next order.

And, if you aren’t already an RCA reseller, we make it super easy to join. Don’t miss out on your best sales — click here to start the process to become an RCA dealer, or give us a call to talk about it.

View all posts by →